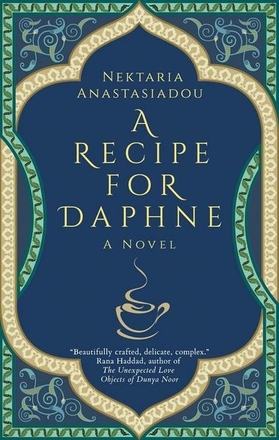 A Recipe for Daphne

Daphne arrives in Istanbul in search of her roots among the Rum, Greek Orthodox Christians, who have lived in the city for centuries. She meets Kosmas, a master pastry chef on the lookout for a good Rum wife, who falls instantly for Daphne. She is intrigued by him, but can she love him in return? Or will a family secret, deeply rooted in the painful history of the city itself, threaten their chances?

Nektaria Anastasiadou's writing has appeared in The Huffington Post, Al-Monitor, Daily Sabah, Mashallah News, Panoply, East of the Web, Sixfold, The Shanghai Literary Review, Eclectica, and The Eastern Iowa Review. In 2019, one of her short stories was included in the American Fiction Anthology and she won the Zografeios Agon, a prestgious Greek-language literary award established in Constantinople during the late Ottoman Empire. She also received an honorable mention in Glimmer Train's Spring 2017 New Writer Contest and in Ruminate's 2015 Short Fiction Contest. She lives in Istanbul and A Recipe for Daphne is her debut novel.