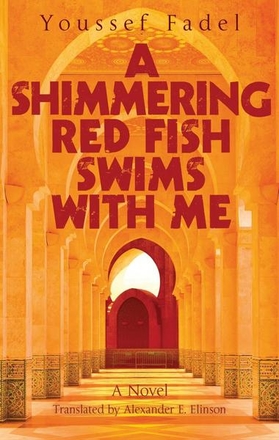 A Shimmering Red Fish Swims with Me

In 1980s Casablanca, Farah arrives from her small town life with big dreams: she wants to sing. She meets Outhman, but he longs to leave the city, to seek his fortune elsewhere. They fall in love, but trouble brews on the horizon. A bitter struggle rages over the construction of the monumental Hassan II Mosque – it will destroy their neighborhood but the government insist this is a necessary sacrifice for the good of Morocco. The two young lovers find themselves caught up in events beyond their control, and in a world that seems to work against their happiness at every turn.

A Shimmering Red Fish Swims with Me is a narrative tour de force: one of power plays and petty jealousies, deceit and corruption, written with masterful attention to detail.

Award-winning Moroccan novelist and screenwriter Youssef Fadel was born in Casablanca in 1949. During Morocco's Years of Lead he was imprisoned in the notorious Moulay Cherif prison (1974-75). A Shimmering Red Fish Swims with Me is his tenth novel, and the final part in his modern Morocco series. He lives in Casablanca, Morocco.

Alexander E. Elinson is an associate professor of Arabic at Hunter College of the City University of New York, and the translator of A Beautiful White Cat Walks with Me by Youssef Fadel.