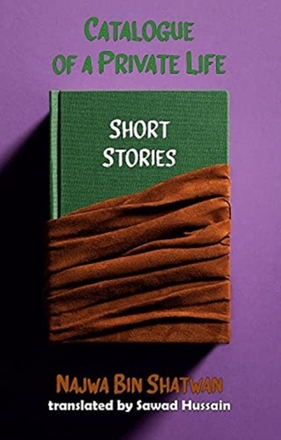 Catalogue of a private life

A grandmother who takes on a thief trying to seduce her daughters. A guard who fantasises about killing his general while locked in battle with a non-existent enemy. A film script about Libya's traffic problems improvised at a workshop. A woman's letter from her old school, which is now a makeshift refugee camp. A cow straying into a field, breaking an age-old truce between warring factions.

The eight stories of Catalogue of a Private Life feel like oft-recounted folktales, where the ordinary has been softly twisted several degrees. Najwa Bin Shatwan navigates the tensions between loyalty and betrayal, ambition and regret, and tenderness and cruelty to weave a portrait of family, war and nation against a stark backdrop of the completely absurd.

Najwa Bin Shatwan is a Libyan academic and novelist, the first Libyan to ever be shortlisted for the International Prize of Arabic Fiction (in 2017). She has written three novels: Waber Al Ahssina (The Horses' Hair), Madmum Burtuqali (Orange Content), and Zareeb Al-Abeed (The Slave Yards), in addition to several collections of short stories and plays. She was chosen as one of the thirty-nine best Arab authors under the age of forty by Hay Festival's Beirut 39 project (2009). In 2018, she was chosen from hundreds of Arab writers for the 2018 Banipal Writing Fellowship Residency at the University of Durham and in 2020, she was chosen to co-lead a series of creative writing workshops in Sharjah (World Book Capital 2019) for Arab writers.