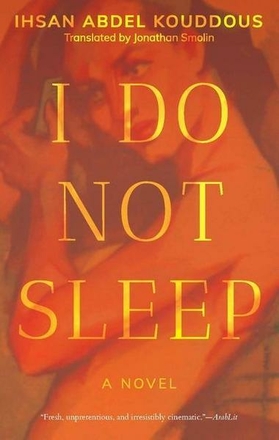 I Do Not Sleep

Raised by her father, sixteen-year-old Nadia got used to being the only woman in his life. One day, however, she comes home from boarding school to find him remarried without her knowledge – or approval. Resolving to get rid of her new stepmother, Nadia conspires to create the illusion of an infidelity, in the hopes of ruining the marriage, and reclaiming her father and home.

After a series of disturbing manipulations, the plan succeeds. However, Nadia's victory turns bitter as she watches her father spiral out of control. Realizing the damage she has done, and the lives she has wrecked in the process, Nadia frantically attempts to repair what is broken. But can she save her family – and her own self –from ruin?

Written as a confessional letter by now twenty-one-year old Nadia, Ihsan Abdel Kouddous' 1955 classic novel of revenge and betrayal is now available for the first time in English. The timelessness of the novel's themes, and its adaptation into what is now a classic of Egyptian cinema, makes it as relevant today as when it first appeared.

Ihsan Abdel Kouddous (1919-1990) is one of the most prolific and popular writers of Arabic fiction of the twentieth century. Born in Cairo, Egypt, Abdel Kouddous graduated from law school in 1942 but left his law practice to pursue a long and successful career in journalism. He was an editor at the daily Al-Akhbar, the weekly Rose al-Yousuf, and was editor-in-chief of Al-Ahram. The author of dozens of books, his controversial writings and political views landed him in jail more than once.

Jonathan Smolin is the Jane and Raphael Bernstein Professor in Asian Studies at Dartmouth College in the US. He is the translator of several works of Arabic fiction, including Whitefly by Abdelilah Hamdouchi and A Rare Blue Bird Flies with Me by Youssef Fadel.