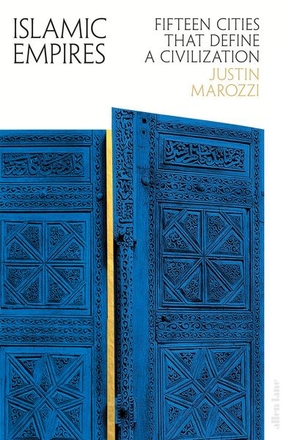 Fifteen Cities that Define a Civilization

Islamic civilization was once the envy of the world. From a succession of glittering, cosmopolitan capitals, Islamic empires lorded it over the Middle East, North Africa, Central Asia and swathes of the Indian subcontinent, while Europe cowered feebly at the margins. For centuries the caliphate was both ascendant on the battlefield and triumphant in the battle of ideas, its cities unrivalled powerhouses of artistic grandeur, commercial power, spiritual sanctity and forward-looking thinking, in which nothing was off limits.

Islamic Empires is a history of this rich and diverse civilization told through its greatest cities over the fifteen centuries of Islam, from its earliest beginnings in Mecca in the seventh century to the astonishing rise of Doha in the twenty-first. It dwells on the most remarkable dynasties ever to lead the Muslim world – the Abbasids of Baghdad, the Umayyads of Damascus and Cordoba, the Merinids of Fez, the Ottomans of Istanbul, the Mughals of India and the Safavids of Isfahan – and some of the most charismatic leaders in Muslim history, from Saladin in Cairo and mighty Tamerlane of Samarkand to the poet-prince Babur in his mountain kingdom of Kabul and the irrepressible Maktoum dynasty of Dubai. It focuses on these fifteen cities at some of the defining moments in Islamic history: from the Prophet Mohammed receiving his divine revelations in Mecca and the First Crusade of 1099 to the conquest of Constantinople in 1453 and the phenomenal creation of the merchant republic of Beirut in the nineteenth century.

Justin Marozzi has spent most of his professional life living and working in the Muslim world, with long assignments in Iraq, Libya, Afghanistan, Pakistan, Egypt, Morocco, Tunisia, Syria, Lebanon and Somalia. He is a former Trustee of the Royal Geographical Society and a Senior Research Fellow in Journalism and the Popular Understanding of History at Buckingham University. His previous books include South from Barbary: Along the Slave Routes of the Libyan Sahara (2001), the bestselling Tamerlane: Sword of Islam, Conqueror of the World (2004) and The Man Who Invented History: Travels with Herodotus (2008). His last book, Baghdad: City of Peace, City of Blood (2014) won the Royal Society of Literature's Ondaatje Prize and was praised by the judges as "a truly monumental achievement".