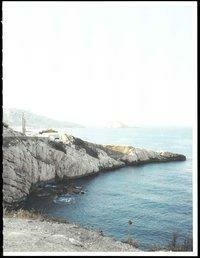 Margret Hoppe's Südwall is a photographic quest along France's Mediterranean coast, as the artist seeks out traces of German nationals forced into exile in the region and of the German occupation during World War II. Unlike the bunkers in Brittany and Normandy, which have been photographed by Paul Virilio, the Südwall has a somewhat obscure history. Running along the French coast between the borders with Spain and Italy, it was built by the Wehrmacht to serve the German occupying forces and was used until 1943 as a defensive position against the Allies. There are still some remains of the bunkers, fortifications, and artillery ranges to be seen in the area around Marseille. In some cases, these ruins are overgrown with Mediterranean flora.

Hoppe's landscape photographs show remnants of the Südwall and pictures of houses and specific sites. The book also seeks to trace the history of German intellectuals like Lion Feuchtwanger, Bertolt Brecht, and Thomas Mann who lived in exile in Sanary-sur-Mer near Marseille.

Margret Hoppe lives and works as a freelance artist in Leipzig. She studied at the Academy of Fine Arts (HGB) in Leipzig and at the École Nationale Supérieure des Beaux-Arts in Paris.