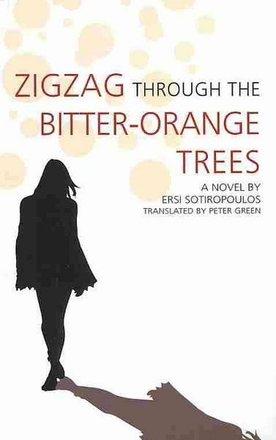 Zigzag through the Bitter-Orange Trees

Zigzag through the Bitter-Orange Trees tells the stories of four disparate young people: Lia, dying in the hospital from a mysterious virus; her brother Sid, the disaffected wanderer, her only connection to the outside world; Lia's nurse Sotiris, an unstable blend of cowardice and desire; and twelve-year-old Nina, who dreams of breaking away from the humdrum life around her. Their voices mingle in a poignant black comedy of isolation and yearning, illusion and vengeance and the hunger for connection.

Sotiropoulos portrays a modern Greece that is wholly her own, at once grotesque and radiant.

Ersi Sotiropoulos is the author of twelve works of fiction; her novel Eva received the Athens Academy Prize in 2011, and her short-story collection Feel Blue, Dress in Red was awarded the Greek national prize for literature in 2013. Her collection of stories Landscape with Dog is also available in English from Interlink.

Peter Green is a translator, historian, biographer, and novelist; he is Dougherty Centennial Professor Emeritus of Classics at the University of Texas at Austin.