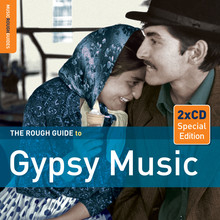 The Rough Guide to Gypsy Music

The legendary Taraf De Haïduks are Hungary's most beloved and best-known group of Roma lautari ("minstrels"). Waltz From Masquerade is taken from their latest album Maškaradă, which interprets the 19th and 20th Century European classical repertoire of Bartók, de Falla, Albéniz and Khachaturian, who were influenced by Gypsy folkloric music. Formed in 1993 in Mostar, Bosnia-Herzegovina, Mostar Sevdah Reunion are united by a passion for sevdah, a sort of Balkan blues with Ottoman roots. In 2006 they devoted an entire album to the late Serbian genius of song, Šaban Bajramovic, and on Guglo Kafava he collaborates with the group for a menacingly mournful number. A lot of Balkan Gypsy brass music is extremely funky and Boban Markovic's orkestar (brass ensemble) is one of the best at keeping the beats up front and swinging. Voz (Train) puffs along at a breathtakingly syncopated pace, making unbeatable wedding music that is at once ancient and contemporary. The Romanian Gypsy brass orchestra Fanfare Ciocărlia are on the front lines of Balkan Gypsy music and Que Dolor (How It Hurts) is a fiery hybrid of rumba flamenco and brass funk. Fanfare Ciocărlia also appear with the husky bass-voiced chanteuse Ljiljana Petrovic on Ma Rov. The enchanting rural, traditional music of Bela Lakatos & The Gypsy Youth Project tells the contemporary tale of young Hungarian Gypsies and can be more fully explored on the bonus source CD. Del O Brishind … (It’s Raining …) laments a world that is cruel to the Romanies who only want a "good world with no worries".
Slavic Soul Party are a Brooklyn-based band who combine the wild and soulful melodies of the Balkans with fiery Gypsy brass, downhome American funk, Mexican polkas and mariachi, and a touch of klezmer. Here, they perform Ya-Ya, a famous tune from the 1960s. A Gypsy jazz guitarist from the Netherlands who plays in the Manouche style of famed guitarist Django Reinhardt, Stochelo Rosenberg covers Stevie Wonder's 1970s funk anthem I Wish. When French film director Tony Gatlif made the movie Transylvania in 2006, he teamed up with more than eighty Romany musicians (including the gifted Hungarian vocalist Beata Palya, heard here on the haunting Promesse) and composer Delphine Mantoulet. The film score won the Georges Delerue Prize at the Flanders International Film Festival.

This collection of contemporary recordings serves as a guide on a journey of discovery into the fascinating and unique story of the Roma people.