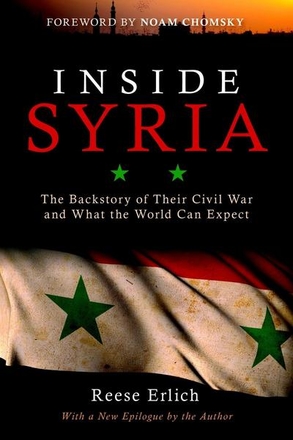 Based on firsthand reporting from Syria and throughout the Middle East, veteran journalist Reese Erlich unravels the complex dynamics underlying the Syrian Civil War. Through vivid, on-the-ground accounts and interviews with rebel leaders, regime supporters, and Syrian president Bashar al-Assad himself, Erlich gives the reader a better understanding of this momentous power struggle and why it matters.

Through his many contacts inside Syria, the author reveals who is supporting Assad and why, describes the agendas of the rebel factions, and depicts in stark terms the dire plight of many ordinary Syrian people caught in the cross fire. Erlich explains how, after colonization by the British and the French and later becoming a focal point of political intrigue by numerous international powers, the region became increasingly volatile and dangerous. He also provides insights into both the past and the present roles of the Kurds, the continuing influence of Iran, and the policies of American administrations that seem interested only in protecting US regional interests, even at the expense of innocent Syrian civilians.

Disturbing, compelling, and enlightening, this timely book shows not only what is happening inside Syria but why it is so important for the Middle East, the United States, and the world.

Reese Erlich is an award-winning journalist and the author of four books on foreign policy, most recently Conversations with Terrorists: Middle East Leaders on Politics, Violence, and Empire. In 2012, the Society of Professional Journalists, Northern California, gave Erlich an Explanatory Journalism Award for his radio documentary titled "Inside the Syrian Uprising". In 2006 Erlich shared a prestigious Peabody Award. Currently, he works as a full-time freelance journalist and holds the position of special correspondent with GlobalPost. He also reports regularly for National Public Radio, Radio Deutsche Welle and CBS Radio News. His articles on the Middle East have appeared in the Christian Science Monitor, GlobalPost, Atlantic Online and Vanity Fair Online.