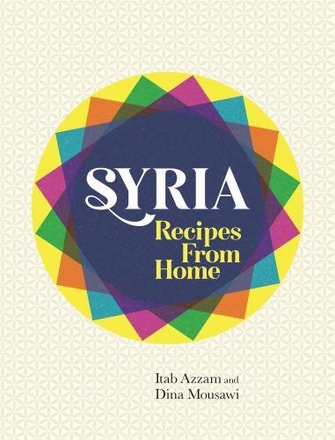 Syrian cuisine deserves a high place in our culinary knowledge and Itab and Dina, with their brilliant recipes and fascinating stories, are the perfect authors to do this. Ruth Rogers

Nothing unites and inspires Syrians as much as food. Even now, in possibly the country's darkest hour, Syrian families in tiny flats from Beirut to Berlin are searching out the best tomatoes, lemons, pomegranates and parsley to recreate the taste of home. Friends and passionate cooks Itab and Dina, both raised in the Middle East, have travelled the globe to seek out the very best recipes from one of the world's greatest food cultures. They met women who welcomed them with open arms whether they lived in a tent, a bunker or a flat – and it is their recipes and stories that form the beating heart of this book.

From Thyme and Halloumi Salad to Freekeh Soup and White Bean and Lamb Stew, Syria celebrates what food can mean to an individual, to a family and to a nation.

Itab Azzam was born in Swaida, Syria, and lived in Damascus until 2011, when she moved to the UK. A filmmaker and theatre producer, she was part of the team behind BBC Four's Syrian School and an upcoming BBC Two documentary following refugees' perilous journeys into Europe. In 2013, she produced the award-winning film Queens of Syria and followed it up in 2014 with Antigone of Syria, a theatre project bringing together Syrian women in Lebanon in a reimagining of Sophocles' ancient Greek tragedy. She has also helped run Mattar, a Syrian charity which helps groups of women displaced or widowed by war to find a living as producers of high-end handicrafts for international markets.

Dina Mousawi is a British-Iraqi actress whose performing experience spans theatre, film and television, as actor and presenter. After working on Antigone of Syria in 2014, Dina went on to produce and direct Terrestrial Journeys, a six-week theatre workshop with Syrian women living in Beirut's refugee camps. She grew up in Baghdad, surrounded by the food of her father's large Iraqi family. Before joining world renowned theatre company Complicite, Dina baked cakes for Mouse & De Lotz, her sister's café in Hackney, and cooked at Park Road Kitchen, her brother's rotisserie and deli in Battersea.