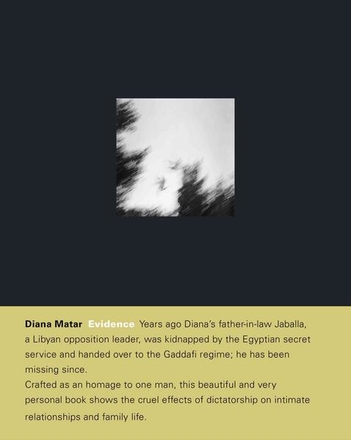 Evidence is the cumulation of six years work on political disappearance by the photographer Diana Matar. Years ago the artist's father-in-law, a Libyan opposition leader, was kidnapped by the Egyptian secret service and handed over to the Gaddafi regime; he has been missing ever since. The first third of the book is a meditation on absence told through photographs and excerpts of letters written by the artist to her missing father-in-law, Jaballa. Slowly the book begins to change as it is made clear that Jaballa's actions have implications for her own life and her family's safety. As she travels through London, Libya, Italy and California, the images and diary entries take one on a journey through contemporary history. Crafted as an homage to one man, the book shows the cruel effects of dictatorship on intimate relationships and family life.

Using photography, testimony and archive, Diana Matar's in-depth bodies of work investigate themes of history, memory and state sponsored violence. Often spending years on a project, she attempts to capture the invisible traces of human history. Her works are concerned with power and violence and the question of what role aesthetics might play in their depiction. A graduate of the Royal College of Art, Matar has received the Deutsche Bank Pyramid Award for Fine Art; the International Fund for Documentary Photography; an Arts Council of England Individual Artist Grant twice; and has been nominated for Prix Pictet in 2010, 2015 and 2016. Her work is held in public and private collections and has been exhibited in numerous institutions including Tate Modern, London; The National Museum of Singapore; Museum Folkswang, Essen, Germany; and The Institut du Monde Arabe, Paris. Her monograph Evidence was published in 2014 by Schilt Publishing Amsterdam to critical acclaim and chosen by New York Times Photography critic Teju Cole as one of two best photography books of the year.