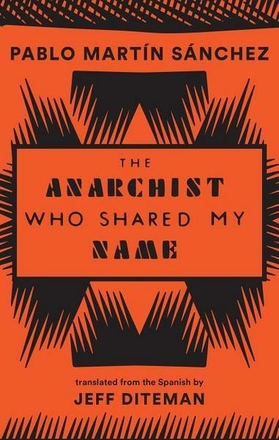 The Anarchist Who Shared My Name

When author Pablo Martín Sánchez searches his own name on the internet, he discovers that he shares it with an anarchist who, in 1924, was part of an attempt to overthrow Spanish dictator Miguel Primo de Rivera. Intrigued, Martín Sánchez sets out to learn more about the life of his namesake. What he uncovers its the fascinating tale of an unintentional revolutionary, swept up in a campaign he isn't sure he believes in – one that leads, ultimately, to a tragic fate.

An alegant chronicle of a dark time in Spanish history, The Anarchist Who Shared My Name takes us on an odyssey from the anarchist's itinerant childhood in Spain to his exile in Paris and ultimate involvement in a revolt against a tyrannical government. With appearances by major historical figures such as Miguel de Unamuno, Vicente Blasco Ibáñez, and Emma Goldman, the story is punctuated by landmark events in European history, including Barcelona's Tragic Week of 1909, the sinking of the titanic, and the Battle of Verdun.

Pablo Martín Sánchez was born in Reus, Spain in 1977. He graduated from the Institut del Teatre de Barcelona with a degree in dramatic art and from the University of Barcelona with a degree in literary theory and comparative literature. He received a master's degree in humanities from the Carlos III University of Madrid an a Ph.D. in French language and literature from the University of Lille-3 as well as a Ph.D. in literary theory and art and comparative literature from the University of Granada. He is the author of a collection of short stories, Fricciones (2011), and two novels, The Anarchist Who Shared My Name (El anarquista que se llamaba como yo) and Tuyo es el mañana (2016). In addition, he has translated the works of authors such as Alfred Jarry, Raymond Queneau, and Wajdi Mouawad and teaches writing at the Ateneu School of Writing of Barcelona. In 2014 he was invited to join the Oulipo and is currently the only Spanish member of the group.