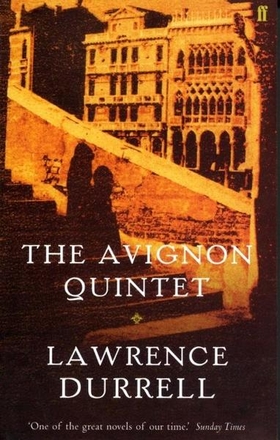 Rich in invention, psychological truth and sheer entertainment, the five short novels that comprise The Avignon Quintet form one of the key works of an undisputed modern master. Included are Monsieur, Livia, Constance, Sebastian and Quinx.

"Another constellation of Mediterranean mysteries and memories. This time it is not Alexandria, but Avignon: the old kingdom of the Popes, the capital of the ancient South of France, the heart of legendary Provence ... The evocation of all of this is superb ... Our old guide bleu in vintage form." The Times

Lawrence Durrell was born in 1912 in India. He attended the Jesuit College at Darjeeling and St Edmund's School, Canterbury. His first literary work, The Black Book, appeared in Paris in 1938. His first collection of poems, A Private Country, was published in 1943, followed by the three Island books: Prospero's Cell, Reflections on a Marine Venus, about Rhodes, and Bitter Lemons, his account of life in Cyprus. Durrell's wartime sojourn in Egypt led to his masterpiece, The Alexandria Quartet, which he completed in southern France where he settled permanently in 1957. Between the Quartet and The Avignon Quintet he wrote the two-decker Tunc and Nunquam. His oeuvre includes plays, a book of criticism, translations, travel writing, and humorous stories about the diplomatic corps. Caesar's Vast Ghost, his reflections on the history and culture of Provence, including a late flowering of poems, appeared a few days before his death in Sommières in 1990.