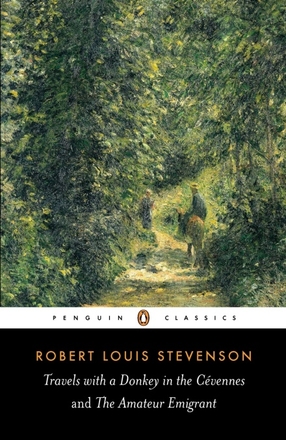 Travels with a Donkey in the Cévennes and The Amateur Emigrant

In 1878, Robert Louis Stevenson escaped from his numerous troubles – poor health, tormented love, inadequate funds – by embarking on a journey through the Cévennes in France, accompanied by Modestine, a rather single-minded donkey. The notebook Stevenson kept during this time became Travels with a Donkey in the Cévennes, a highly entertaining account of the French people and their country. The Amateur Emigrant is a vivid journal of his travels to and in America – decribing the crowded weeks in steerage with the poor and sick, as well as stow-aways – and the train journey he took across the country. Filled with sharp-eyed observations, this work brilliantly conveys Stevenson's perceptions of America and the Americans. Together, the two pieces are fascinating examples of nineteenth-century travel writing, revealing as much about the traveller as the places he travels to.

Christopher MacLachlan's introduction places the works in their biographical and literary context. This edition also includes pieces from Stevenson's original notebooks, a chronology, further reading, notes and maps of the journeys.

Robert Louis Stevenson was born in Edinburgh in 1850. The son of a prosperous civil engineer, he was expected to follow the family profession but was finally allowed to study law at Edinburgh University. Stevenson reacted forcibly against the Presbyterianism of both his city's professional classes and his devout parents, but the influence of Calvinism on his childhood informed the fascination with evil that is so powerfully explored in Dr Jekyll and Mr Hyde. Stevenson suffered from a severe respiratory disease from his twenties onwards, leading him to settle in the gentle climate of Samoa with his American wife, Fanny Osbourne.