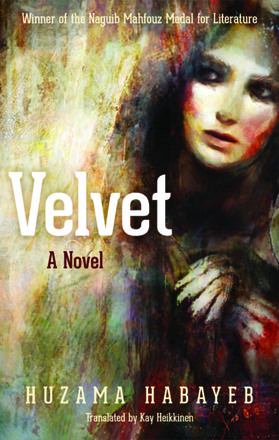 Hawa is a child of the grinding hardship of a Palestinian refugee camp. She has had to survive the camp itself, as well as the humiliation and destruction of an abusive family life. But now, later in life, something most unexpected has happened: she has fallen in love.

Velvet unfolds over a day in Hawa's life, as she makes plans for a new beginning that may take her out of the camp. She sifts back through her memories of the past: the stories of her family, her childhood, and her beloved mentor, who invited her into the glamorous world of the rich women of Amman. This is a novel of enormous power and great beauty. Rich in detail, it tells of the women of the camp, and the joy and relief that can be captured amid repression and sorrow.

Huzama Habayeb is a Palestinian writer who was born and raised in Kuwait, where she started writing and publishing short stories, poetry, and journalistic pieces as a student. When the Gulf War erupted in 1990, she fled to Jordan and established her reputation as a short-story writer. Her first novel, Root of Passion, was published in 2007 to wide critical acclaim. Velvet is her third novel.

Kay Heikkinen is a translator and academic who holds a PhD from Harvard University and is currently Ibn Rushd Lecturer of Arabic at the University of Chicago. Among other books, she has translated Naguib Mahfouz's In the Time of Love and Radwa Ashour's The Woman From Tantoura.