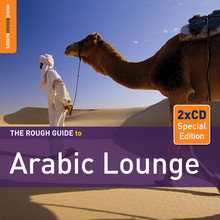 Welcome to the Arabic lounge groove where the hot and dry rhythms of the desert meet the cooling and refreshing melodies of the oasis. With oud and kanoon, with sampler and soul, join the allnight celebration from Cairo to Casablanca.

Anglo-Egyptian singer Natacha Atlas has spent more than a decade fusing incredible electronic beats with Arabic music with the likes of Transglobal Underground, Sinéad O’Connor and Sarah Brightman. Hayati Inta is taken from her latest release "Ana Hina", in which she delivers a stunning contemporary tribute to the golden age of Arabic classicism of the 1950s and 1960s. An Israeli singer of Moroccan and Egyptian extraction, Ishtar blends a variety of Mediterranean strains into her own variety of million-copy selling oriental pop. Lamouni (Ligharou Meni), featured here, is a distinctly Ishtar cover of a traditional Tunisian song. Considered by many to be one of the most outstanding lute players of the twentieth century, the late Iraqi oud player Munir Bashir introduced the instrument to audiences all over the world. Johnny Guitar is a bolero adaptation on the oud.

One of the finest oud players in Lebanon and a veteran of Marcel Khalife’s Al Mayadine ensemble, Charbel Rouhanahas toured the international circuit extensively. Ladyfingers, included here, is taken from his 2008 release "Hand Made", his ninth international release to date. Djamel Laroussi draws his inspiration from a limitless pool that combines his Kabylian roots, Maghrebian poetry, African funk inspirations, bellydance, gnawa and Latin rhythms into a Berber rock-rumba fusion. N’Kodo is taken from the album "Étoile Filante", which was on the Algerian charts for many months. Another runaway hit, the crossover track El Huerfanito (Ya Habibi Ta’ala) featuring the Lebanese singer Hanine, is taken from the bestselling album "Arabo-Cuban".

A musician, composer and producer, Ghazi Abdel Baki spent many years participating in various bands in the USA before returning to his native Lebanon. Al Guineyna is a contemporary Arabic-bossa, taken from "Communiqué #2", which gives musical treatment to the poetry of Rabindranath Tagore and the Sufi Al Hallaj. Nicknamed the "Sultan of the Buzuk", Mohamed Houssein was born in Syria and is one of the finest buzuk players in the Middle East. He has toured numerous countries around the world and composed many original songs, such as Taksim Bouzouk.

This album also features the considerable talents of Palestinian singer-songwriter Rim Banna, the Egyptian cellist Emad Ashour and the unique singing voice and fiddle-playing of Akim El Sikameya, which can be explored on the bonus CD. Spanning colourful bazaars and sensual scarf-draped bellydancers, this album hopes to send you to tarab (the state of transcendence) – the ultimate goal Arabic music seeks to inspire.