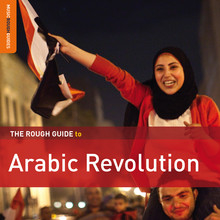 During the Arab Spring, as protestors flooded the streets in protest against the ruling elite, it was music that galvanised their spirit and communicated their message out loud. Powerful chants, soaring traditional melodies and articulate hip-hop radiated throughout the revolutions. This Rough Guide charts the best underground tunes by El Tanbura, Sami Yusuf and Freemuse award winner Ramy Essam.

Across the world today, a PC or even a smartphone can double as a recording studio. That same smartphone (or an internet-connected PC) can transmit newly created anthems to millions, as it did during the Arab Spring. This Rough Guide explores the best underground hits that spurred on protestors during the recent seismic revolutions that occurred in the Arab world.

In the early days of the Tunisian revolution, a young rapper captivated the nation. Hamada Ben Amor, who is more commonly known by his stage name "El General", raised many eyebrows with songs like State Of The Nation and Head Of State. They became instant hits online, but under Ben Ali's strict censorship these songs were considered treasonous, and El General found himself behind bars. El General was released from prison on the condition that he could no longer write or perform political songs. Ben Ali's reign quickly ended, though, and El General is now considered the "Voice of the People", and not just in Tunisia. His songs were regularly played in Cairo's Tahrir Square during the Egyptian revolution. Another Tunisian singer Emel Mathlouthi is also heard on this album.

Two of the most prominent artists from Tahrir Square were El Tanbura and Ramy Essam, both featured on this Rough Guide. El Tanbura are a collective of master musicians and philosophers (and custodians of Egypt’s oldest folk melodies) who hail from the Mediterranean city of Port Said. Cairokee are an Egyptian band who fuse rock ‘n’ roll with conscious lyrics and folk music references. Sami Yusuf is dubbed "Islam's biggest rock star" and has performed at Wembley Arena. I'm Your Hope was recorded during the Egyptian revolution and dedicated to the youth of the Arab world.

Before 2011, Ramy Essam was not a household name in Egypt. In fact, he was simply a student with a guitar and a remarkable songwriting talent. He began singing in Tahrir Square in the early days of the revolution when there weren't any formal "stages". Soon, his songs ordering Mubarak to Irhal, Irhal (Leave, Leave) had become the soundtrack to the revolution. This Rough Guide comes with a full-length album by Ramy Essam.