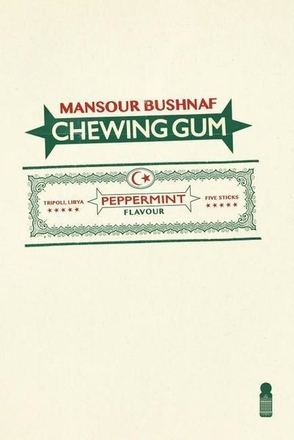 Young Mukhtar is frozen in time, gazing at his beloved Fatma as she disappears into the streets of Tripoli. Around these young lovers, Bushnaf weaves a compelling network of images: a litter-strewn park, a bewitching Italian statue and a fluttering red scarf. Through these images, imbued with social, historical and existential import, Bushnaf paints a dark portrait of a country in crisis and an individual, alone at the centre of conflicting ideologies, all attempting to explain his existence away.

With its satirical and semi-journalistic style, Chewing Gum is an existential quest to understand how a society exists beneath a repressive dictatorship. The rhythmic fact of chewing relentlessly continues as individuals, time and land turn to waste. In this debut novel, no one escapes the critical gaze of a writer who witnessed first-hand the brutality of Gaddafi's regime. At times downright funny and at times poignantly sad, Chewing Gum depicts the academics, politicians and businessmen of Libya who all claim a monopoly on the truth of the country but who all, inevitably, fail the individual.

Mansour Bushnaf is a playwright, novelist and essayist, born in Libya, 1954. He was imprisoned for ten years in the early 1970s because of his political activism and critical writings and is renowned for his award-winning satirical plays. Chewing Gum is his first novel. He lives and works in Tripoli.