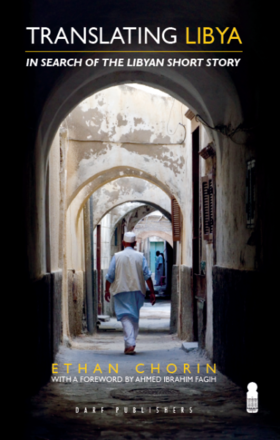 In search of the Libyan short story. With a foreword by Ahmed Ibrahim Fagih.

Part anthology and part travelogue, Translating Libya presents the country through the eyes of sixteen Libyan short story writers and one American diplomat. Intrigued by the apparent absence of "place" in modern Libyan short fiction, Ethan Chorin resolved to track down and translate stories that specifically mention cities and landmarks in Libya. The stories trace the influence of the ancient Romans, the later Italian occupation and the current influx of foreign workers from Africa and further afield.

The authors open a window on today’s Libya – a rapidly urbanizing country with rich oil reserves, recently renewed diplomatic relations with the West and a nascent tourist industry based on its well-preserved ancient cities. This is a unique introduction to a country that has for some time been ‘off the beaten path’.

Ethan Chorin is an American businessman and writer. He was one of the first U.S. diplomats posted to Libya after the lifting of U.N. sanctions, and returned to Benghazi after the 2011 Libyan Revolution as co-founder of an organization working to build trauma capacity. In addition to Translating Libya, he is author of Exit the Colonel: the Hidden History of the Libyan Revolution (Public Affairs, 2012), a comprehensive account of the origins of Libya's February 17th Revolution. Chorin's features and Op-Eds have appeared in a number of international publications, including The New York Times, The Financial Times, Forbes and Foreign Policy. He is a frequent commentator on Libyan affairs for the BBC. A two-time Fulbright Fellow (Jordan and Yemen), Chorin holds a PhD from the University of California at Berkely, an MA from Stanford University, and a BA from Yale University, with distinction in Near Eastern Languages and Literatures.